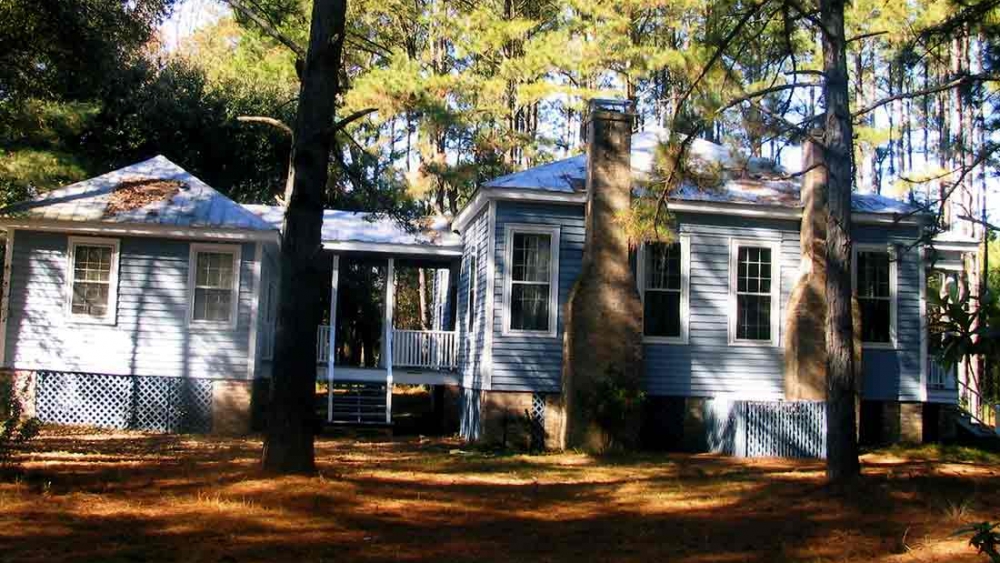 At a time before and during the Civil War,  Alexander Graham (1800-1865) and his wife, Elizabeth Purcell Graham (1806-1888) lived in a Greek Revival cottage on the east side of the Cheraw to Fayetteville Road, now Highway 401, two miles above Gilchrist Bridge on the Lumber River, in what was then the upper reaches of Robeson County.  That part of Robeson County where the home was located was to become a part of Hoke County upon the formation of Hoke in 1811.  Many of the Graham neighbors were related; Mrs. Graham’s sister lived across the road in a two story house (still standing), two of her brothers not more than two miles distant and an uncle at Mill Prong, three miles distant.  All had large families.  The Grahams, like their other neighbors, related and unrelated, were Presbyterian descendants of Highland Scots.  Deep tragedy was unknown to them and while the Grahams had lost two children in infancy, six others had survived to reach their majority.  Two sons served in the Confederate army.  Their lives were tranquil until the arrival of General W. T. Sherman and his army.

On March 8, 1865, General Sherman crossed over the North Carolina line, having left a path of destruction in South Carolina, and camped near Laurel Hill Presbyterian Church, ten miles south of the Graham home.  The Yankee soldiers thought the area looked “real northern like.  Small farms and nice white tidy dwellings”.  Torrential rains had set in and “the roads became a sea of mud and water.”  Sherman remarked, “It was the damnest marching I ever saw.”1

March 8, 1865, the day the Federals crossed into North Carolina, was also a busy day for the Confederates.  At 10:30 AM, a dispatch from General Beauregard in Charlotte to General Johnston in Fayetteville was as follows:  “I respectfully suggest that Governor Vance and yourself call on the people residing along Sherman’s supposed line of march to remove temporarily all their supplies and animals at least twenty miles to the right or left of his flank routes.”  At 12:15 PM, Major General Wheeler sent a dispatch to Major McClellan giving his opinion that “the main column of the enemy will move on the road from Cheraw to Fayetteville or on roads near to and parallel to that road as it passes through a fruitful country.”  General Wheeler continued that the Confederates should take possession of the Gilchrist Bridge over Lumber River and the two bridges above it.  A dispatch from Lt. Col. Montgomery to Major Taylor recited that all three bridges had been lost and the Confederates had retired to Antioch Church.  At 4 PM, a dispatch from Asst. Adjutant General Anderson in Fayetteville to General Wade Hampton recited that the detachment at Antioch Church was “the only force known to us between this place and the enemy”.2

Antioch Presbyterian Church stands today between Red Springs and Raeford on Highway 211, some ten miles east of Gilchrist Bridge and the Graham home.  The present church building was constructed after the Civil War but replaced an existing building on the same site. 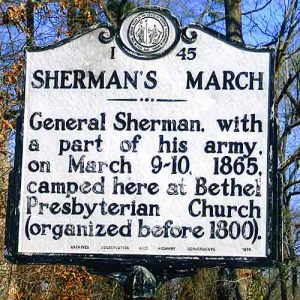 On March 9, 1865, the Federals crossed the Lumber River at Gilchrist Bridge and entered Robeson County.  General Sherman took refuge for the night in Bethel Presbyterian Church, also located in Robeson County, five miles north of Gilchrist Bridge and two miles above the Graham home, all in a “terrible storm of rain”.  Sherman “stretched himself out on one of the wooden pews for the night.”  Someone left a penciled memo in the Church bible, “Mr. McNeill will please pray for old Abe, – By Order – W. T.  Sherman – Major General Commanding U. S. Forces.”3

In a typed narrative dated May 24, 1932, A. D. Currie recites his fateful connection to the last hours of the life of Alexander Graham.  Mr. Currie, writing 67 years after the event, was likely a boy too young for Confederate service but not too young to have the event impressed on his psyche for the remainder of his life. Currie, from Laurinburg, served in the North Carolina legislature as a member of the 1925 House of Representatives.

Graham, though not privy to the correspondence between Beauregard and Hampton, had acted, according to Currie, in accordance with the spirit of the directive, Graham’s home being directly on the Cheraw to Fayetteville Road.  Several days prior to March 9, 1865, Graham had removed, stored, and arranged his corn, wheat and meat in the barns and cribs at the residence of John C. Currie, the father of A. D. Currie, a distance of some nine miles from the Graham home, as it was judged to be a place of safety.  Graham used two wagons and eight mules.  The mules belonged to Graham’s daughter who had returned as a widow from her home in Mississippi in order to avoid Yankee depredations in that state.  Her servant, Wash Wall, accompanied her on the return.  According to A. D. Currie, Wash had been “raced and chased” by the Yankees in Mississippi and the daughter, while agreeing to help her father, admonished Wash to take particular care of the mules.  On March 9, 1865, feeling insecure even at the Currie residence, Graham had Wash and another servant load the two wagons with meat and proceeded another two and a half miles from the Currie house and stationed himself between “two little hills”.  Graham was armed with a pistol and shotgun and rode a black mare to accompany the two wagons.  A. D. Currie loaned Mr. Graham his pistol and the sheepskin holder for the pistol which he had made himself.  According to A. D. Currie, Graham stated “Let them find (me) if they can, and if they do, I will mount my black mare and make for Drowning Creek (Lumber River), jump off and swim across.  The Curries did not have a horse and “shanked it off” to hide at the “head of a branch.”

In the days immediately following, those in hiding, returned one by one to the Currie house, now an “ash bed”, except for Mr. Graham.  A servant reported that, while in hiding, she had seen Mr. Graham chased by Yankees and two former enslaved persons, one of whom bore a grudge for a recent punishment.  There was a lapse of four days from the time Graham was seen by the Curries and the formation of a search party consisting of Dr. Colin Bethune, A. D. Currie, his twin brother Calvin, and another.  They located the starting point of the two mile “race for life”.  “The tracks of the victor and the victim were so well pressed in the soft ground that the rains for quite awhile made no signs of blotting out their tracks.  They showed just where the race ended and death began – the animal circled around a big pine tree and Mr. Graham’s feet were against the big tree, his head pointing the way they came from.”  Calvin was the first to sight “Mr. Graham’s white hair glistening in the distance.”  The pistol and shotgun were gone, along with the wagons of meat, only A. D. Currie’s homemade pistol holder remaining.  B y then, it was late in the evening and without means to carry the body, it was left on an improvised “cooling board” after “placing his stylish top hat on his face”.  The next day, A. D. Currie was deputized by his father to measure the body for a coffin.  Though his hair “stood on end”, A. D. Currie managed this assignment and, afterwards, as he had been instructed, he made contact with the community coffin maker.  The coffin maker performed his function and even provided two oxen for transportation for the 12 mile trek to the Purcell graveyard at a speed, according to A. D Currie, of two miles an hour.  This was his “job for anyone who might die.  He made and furnished everything.  If he ever charged one cent for anyone for such work, I would like to see the family who says he did.”

It was a time of great devastation and disorganization.  The coffin maker dug the grave.  According to A. D. Currie, the coffin maker and Graham’s widow were the only attendants.  Wash “changing his camping quarters her and there” managed to save the eight mules belonging to the Graham daughter and according to A. D. Currie, had his revenge on certain individual Yankee soldiers, which is another story.

Within ten days of her husband’s death, Elizabeth Purcell Graham, was to face another tragedy.  Her son, Thomas Scott Graham, was mortally wounded on March 19, 1865, at the Battle of Bentonville, and died in a hospital in Raleigh on March 23, 1865.  The graves of the father and son rest in the Robeson County Purcell graveyard, now in Hoke County.

Shift forward to 1973.  Ella Alderman McLean, the grandniece of Elizabeth Purcell Graham, and her son, Alderman McLean, contacted the author and urged a purchase of the old Graham house which had to be moved from its original site or face demolition.  The house was purchased, moved four miles to the vicinity of the Riverton community in Scotland County, where it stands today, after renovation which was commenced with the enthusiastic assistance of the grandniece and her son.  A kitchen annex was constructed using materials from another antebellum structure and today is a separate apartment.  The house has several interesting features:  an eight foot wide center hall paneled with heart pine, ceilings ten and a half feet tall, doors and windows of the same height, four chimneys, one for each of the four rooms.  It sits on brick piers four feet off the ground.

The Graham family of two parents and eight children made do with this four room residence with a separate kitchen which probably contained a dining room.  The house was located on a 430 acre tract belonging to the Grahams resulting from the 1851 division of the lands of John Purcell, the deceased father of Mrs. Graham.  In the 1860 census, Graham was listed as a farmer with 800 acres of land.

Strangely enough, the story of Alexander Graham was not widely known.  The Lumber River Scots, the family history for the Grahams, meticulously recites the birth and death dates for Mrs. Graham and all the children, yet it does not mention the birth and death dates for Alexander Graham nor the circumstances of his death.  In addition to A. D Currie’s narrative, correspondence is available including a letter dated July 12, 1937, from Dr. William A. McLeod, Presbyterian minister in Texas, to Dr. A. C. Bethune in Raeford, referring to Alexander Graham as having been “killed in 1865 by Sherman’s bums”.  The author through the years had noticed only the coincidence of the date of death on the tombstone of Alexander Graham, March 9, 1865, as being the same date that General Sherman spent the night at Bethel Church.  Since Graham was sixty-five years of age in March, 1865, the author assumed that the stress of the arrival of Sherman’s army had resulted in a natural death for a man of his age at that time.  The research and information from John C. Kelly of Rockville, Maryland, descendant of local families and native of Hoke County, and Dickson McLean, Jr. uncovered the answer to this mystery for which the author is much indebted.

2 The War of the Rebellion, a Compilation of the Official Records of the Union and Confederate Armies, Series 1 – Volume XLVII, in three parts, Part II Correspondence, Washington: Government Printing Office, 1895.